I read a book from Austing Kleon called Steal like an Artist  its a great uplifting book that motivates you to be creative.

In the book he has a graphic that stuck with me. It describes the life of project which is the best visual description for what I am sure many of us go through when starting a project. 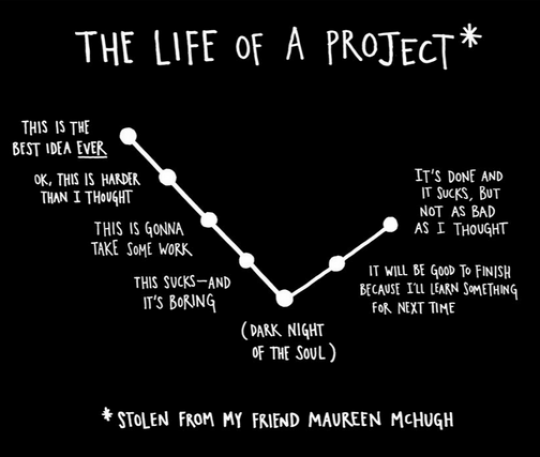 All projects, ideas, endeavours will typically follow these sequences of steps, which are really not project steps but mostly emotional phases that you will go through. It is important not to get discouraged when you come down from the HIGH of a new idea and make sure to continue the project until the end.

The take away from this is that you  have to take all projects to the end. Even if you start with a really big idea you have to at least end up delivering a sketch or a report or a small prototype. Anything that proves to yourself that you have completed the project. This will help you create a habit of finishing the things you start and not leaving things half way.

So keep going even if you don’t see the end.

View all posts by rldh

This site uses Akismet to reduce spam. Learn how your comment data is processed.